Last week I had the honour of photographing my first birth!

I have been with Tara and Derek since their wedding; maternity, their first born’s newborn through her first year, every Halloween, and some springs and christmas’ thrown in for good measure. Tara started out as a stranger and quickly turned into one of my best friends.

I remember chatting with Tara a couple of years ago about birth photography. After she had Alexis she regretted not having done it and asked if I would photograph her next labour and birth if she ever got pregnant again. I vividly remember saying YES! But thinking in my head “IF she gets pregnant again (I was sceptical), I hope it’s not until after I have my first.” Birth photography is something that I’ve considered for a while, but was a little apprehensive that it would scar me from having my own. Now, fast forward to 9 months ago; a text with two positive pregnancy test and a moment of panic and the realization that I was 100% going to see my friends vagina.

As the due date got closer I prepared, packed a bag, did some research, made sure my batteries were charged and HOPED that Tara wouldn’t go into labour on Christmas! Well, she didn’t, but her water definitely broke on Christmas. When I got that “Umm…” text I immediately knew it was go time.

When Tara called me half a second after a contraction, out of breath and said she was headed to the hospital I couldn’t help but laugh at her (that’s what best friends are for right?) From that moment on all my nerves were gone. Tara handled her labour like a boss! (I think I was more nervous about the no epidural thing then she was!) She arrived at the hospital with her husband and sister around 6:30am and baby was born at 9:10am. The midwife was AMAZING throughout the entire labour and birth, definitely convinced me to go that route when it’s my turn – and yes, after witnessing everything I will still be having one, or three of my own! 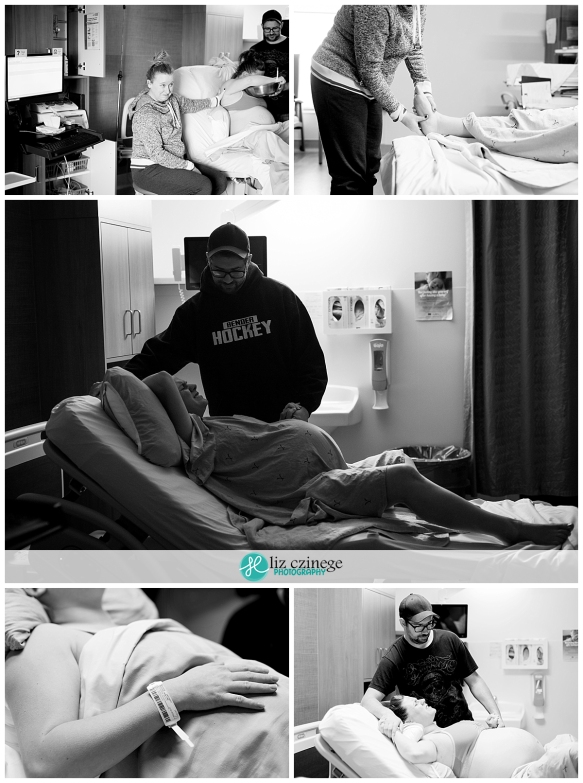 In addition to not knowing the gender of the baby, they also hadn’t told anyone the names they were considering. So when the baby was born and Tara looked at the baby and said “it’s a girl, oh Everly.” The entire room teared up. It was such a special moment. I’m in love with her name, it suits her so perfectly.

I am so honoured that I got to share this with Tara, Derek and Kelly. I couldn’t imagine experiencing my first birth with anyone else. I am still in awe of my friend, as far as births go, it was pretty much perfect.

Alexis is already and amazing big sister. Although she REALLY wanted a brother, she warmed up to her instantly. She made sure everyone got a turn to hold Everly (quickly!) before she said to pass her onto the next visitor, her ulterior motives were revealed when the last person held her and she said “Okay, now it’s big sister’s turn!”

I am so, so happy for the four of you. I love you so much!